PPL’s Gav & Ian embarked on an ‘interstate’ adventure which took them around an extinct volcano that sticks out of the landscape much like, er, an extinct volcano. Fortunately, the only sign of smoke around those parts nowadays comes from just down the road in Nimbin. Smell the serenity. You can spend 5 hours climbing Mt Warning on foot to see one side of it, or see the whole thing in about 15 minutes, orbiting around this spectacular landmark by air. Just sayin’.

This trip started out as a mini Navex to help maintain our basic navigation skills without the use of electronic aids, while researching a potential sight-seeing flight for any future passengers who may be interested in big hills covered in trees. The idea was to plan and fly a route from Archerfield airport, south down through the Scenic Rim to Rathdowney, then turn east and head for Mt Warning. Once there, we would perform a low-level clockwise orbit around the extinct volcano, then head back to Archerfield via Canungra and Mt Tamborine.

Because we had planned to do this during the Christmas – New Year break, we were able to plan and fly through two of the Restricted areas that we were not usually permitted anywhere near (Greenbank & Canungra) due to live firing by the military. Apparently, our trusty defence forces all go on holidays at this time of year on the assumption that all our enemies do the same. Very civilised.

Our preparation consisted of the usual paper-based flight planning learned and practised ad nauseum during the PPL navexes. As we did not plan to enter class C airspace, we did not submit the flight plan to Air Services. However, we did leave a copy with the flying school, safe in the knowledge that if we did happen to go missing, at least they would go looking for their aircraft in case there were some salvageable parts.

Our taxi call at Archerfield included a check that Greenbank and Canungra were both de-active as per NOTAMs. Over-cautious perhaps, but better than trying to explain ‘all those little ventilation holes in the wings’ to the CFI upon our return.

We took off from Archerfield and tracked due south on 180 magnetic. This took us straight through Greenbank Restricted Area (R633A) at 1000 feet (just because we could, even though the Brisbane Centre steps allow us to climb to 3500 here). No sign of anti-aircraft fire today. Exiting the ‘red zone’ unscathed, we began our climb (under the class C steps) to our planned altitude of 6500 feet (track 180 magnetic is considered a western track, so VFR cruising levels are even thousands plus 500). As we were now inside the Archerfield southern training area, this altitude should keep us above most of the shenanigans going on below.

We continued past the relatively new Wyaralong Dam which provides a definitive landmark for the map and pencil navigator, as well as a good opportunity to check the accuracy of the heading calculation, then passed just outside Boonah’s 10NM CTAF area. As we had the luxury of 2 radios, while one remained on area frequency (Brisbane Centre), we tuned the other to the Boonah CTAF, not to make a call but just to keep an ear on any traffic that may be headed our way.

Our turning point at Rathdowney was fairly easy to spot thanks to a couple of major highway intersections. After losing 1000 feet now that we were on an easterly track, our new track of 105 magnetic had us heading straight for a mountain range. According to our trusty VTC this was the McPherson Range, which was put there to keep Queenslanders out of New South Wales and vice versa. As some of the peaks in this range are slightly higher than our target of Mt Warning, we weren’t expecting it to be so prominent on the skyline from this angle.

As we crossed the edge of the escarpment and our stomachs and the ground below us fell away, we started our descent to our target altitude of 2500 feet over the little town of Tyalgum. As Tyalgum is only 4NM from the edge of the escarpment, at 95 knots cruising speed we had just two and a half minutes to lose 3000 feet. You don’t need a supercomputer to work out that is somewhat more than the comfortable 500 feet per minute descent rate that we like to achieve so that our passengers’ eardrums do not burst.

In hindsight, we should have started descending earlier so that we crossed the escarpment at 4000 feet AMSL, which would place us at about 500 feet above the highest terrain at that point. In today’s gentle 10 knot northerly breeze this would not present any problems but stronger winds from a different direction might require a rethink of this strategy. Maybe next time.

About a mile past Tyalgum, we made our 10NM CTAF call for Murwillumbah, indicating our intention for a clockwise orbit around Mt Warning at 2500 feet. Then it was all cameras at the ready and enjoy the stunning view of an ancient volcano from half way up its rugged slopes. 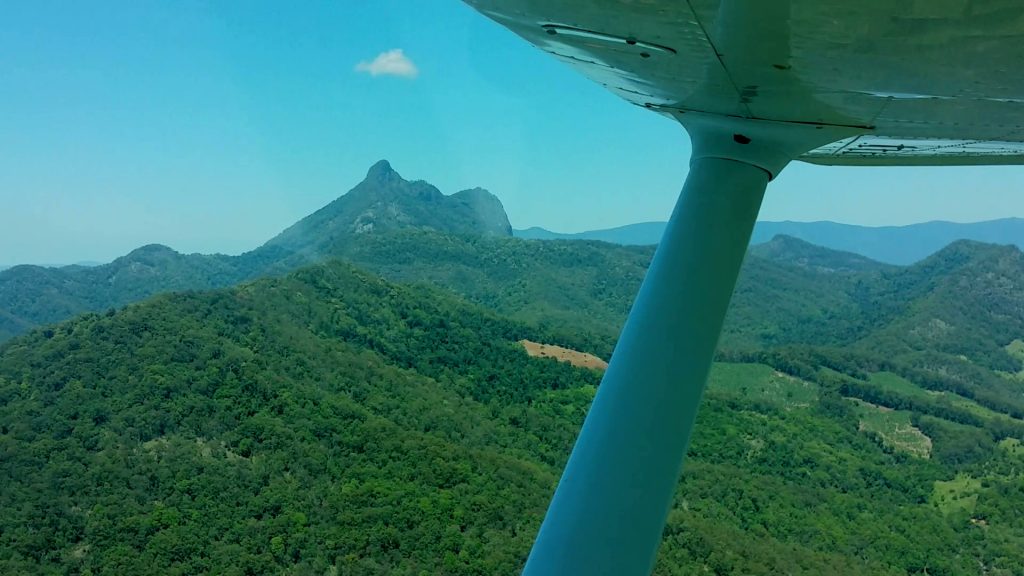 After a full lap of Mt Warning, including some impromptu tourist information (made up on the spot but who is going to argue with you if you sound convincing?) we were back at Tyalgum, tracking 336 magnetic and now faced with an almost 4000-foot mountain range directly in our path. To make sure we didn’t frighten too many koalas, we adopted an S shaped track to gain the height we needed before crossing the McPherson Range once again.

Again, in hindsight, a second lap of the volcano, much closer to the peak while climbing slowly towards our target altitude, would have resulted in a less dramatic climb rate with the added benefit of a spectacular view of the inside of the largest erosion caldera in the southern hemisphere.

As the familiar landscape of the Scenic Rim greeted us once again, we took a quick detour right of track to fly over the Canungra restricted area to see if anyone had failed to get the holiday memo and wanted to shoot us out of the sky. We also had to be vigilant along this leg as it is a marked hang gliding area and it’s hard to hear them screaming at you over the roar of the engine.

Back on track, we set sail for our inbound reporting point at Park Ridge Water Tower, joined the circuit and returned to earth to live happily ever after. In truth it was more like miserable and whining until the next time we could take to the skies.

All up this flight took 84 minutes (circuit-to-circuit) in a Cessna 172 with a target cruising speed of 95 knots, yielding a log book time of 1 hour 40 minutes. It proved to be a good exercise for maintaining basic navigation skills while show-casing some of the most spectacular hinterland scenery South-East Queensland and North-East New South Wales have to offer. 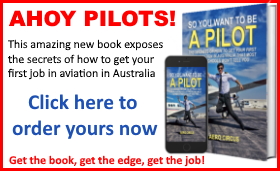 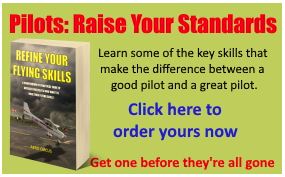